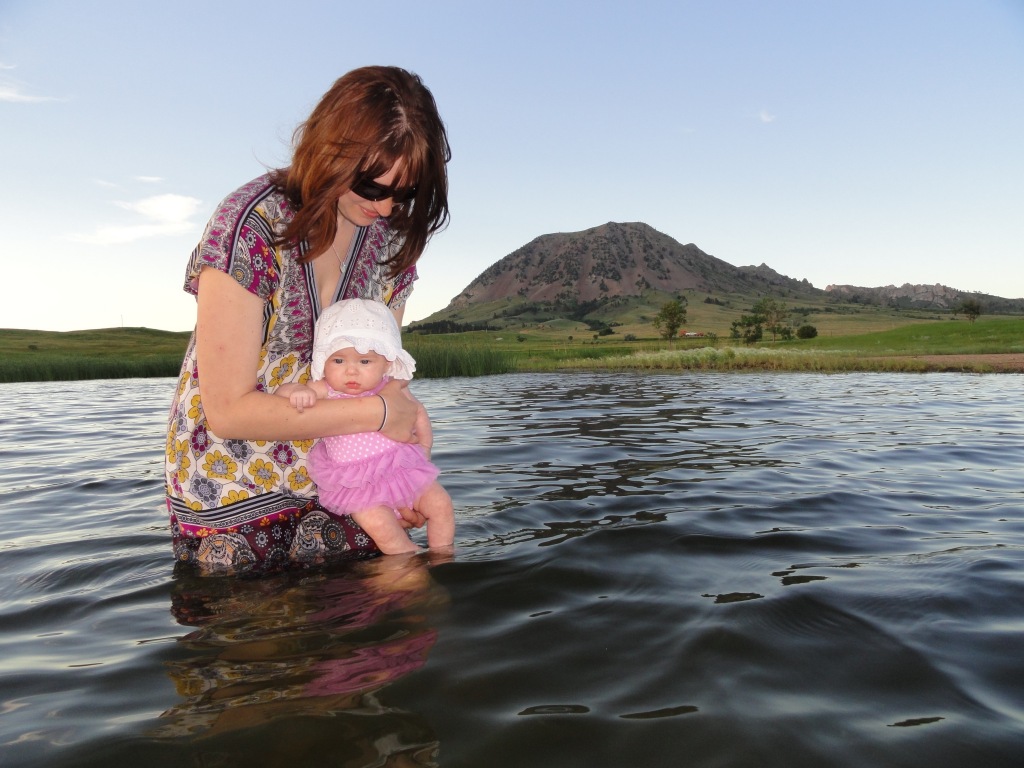 My Miriam Scarlett (Mira for short) – celebrated her first birthday on March 15. We have come so, so far since she came into the world. It was not only the beginning of her life, but the beginning of our lives as parents. Mira was the first for each of us.

My last trimester was a difficult one and she was born two weeks early at 5 pounds 13 ounces. She was tiny but intense from the beginning. Our first challenge, as it is for many, was breastfeeding. She simply refused – after two days she had dropped dangerously fast to under 5 pounds. Her pediatrician insisted we supplement with a bottle or she’d be classified as “failure to thrive” and not be allowed to leave the hospital.

Mira refused me for a full six weeks despite the intervention of a spattering of experts and professionals. Every three hours, I’d try to nurse her for an hour. During that hour, she’d rage. So not to confuse her, I’d then hand her off to someone else for the bottle. Each time it felt like I was handing her off for someone else to satisfy and comfort.

About two weeks after her birth, my husband found me within her nursery weeping in the rocker, desperately trying to get her to latch. He promptly got a bottle, handed it to me and spoke three words: “Feed your daughter”.

That moment was significant. From the outside it must have seemed a small thing, a logical thing. For me it was permission. Liberation. It was as if I’d been suffocating for days and someone finally opened a window. Whatever damage might come from “nipple confusion” – it certainly couldn’t be more detrimental than the sad cycle Mira and I had created in the effort of its prevention.

I continued to pump and try to nurse, but it never did happen for us. At six weeks, I had surgery and was hospitalized for two nights. At that point, I abandoned the breast feeding effort. I simply made peace with it. I had neither the physical strength nor the emotional reserves to keep trying.

While feeding became easier, the pattern of our days looked very little like that of my friends and family with infants. Mira cried if she was awake and slept very, very little. She almost never napped and nights were a constant battle. While she cried virtually all day, in the evenings – she raged: back-arched, purple screams for 6-7 hours at a stretch.

My husband is a police officer who works 12-hour shifts. He picked up a ton of overtime to replace the lost income during my maternity leave. He was exhausted all the time and virtually never home. He is a wonderful, kind man and he loves his daughter, but he had such difficulty in those early months. He is made to fix things, and there was no “fixing” whatever vague, shadowy thing was plaguing our daughter. There were many, many hours I felt entirely on my own.

I returned to work three months after she was born. Several weeks after she started daycare, as I picked her up, her primary caretaker pulled me aside. She crossed her arms like someone about to make a confession. “Heidi,” she said, “I’ve been doing this a lot of years and I’ve never met one like her. What can we do when she’s having an episode like that?” I fumbled through a list of things. They felt false on my lips. I was this baby’s mother and all I could offer was a sad string of attempts that never really worked for me.

At four months, things gradually got better. Though “better” was still not close to everyone else’s “normal”. My cousin has a beautiful, sweet little boy just a few months older than my Miriam. I loved to wrap my arms around his soft quiet warmth and wondered what it would be to hold my own that way. Miriam was still only when she slept. Otherwise, she twisted and pulled and thrashed as if she were battling something the rest of us couldn’t see.

At six months, I started to feel like there was hope and things were getting better. And they were.

That was the turning point for us. Six months.

She is still intense. She still isn’t much for cuddling. But that intensity has evolved to something more akin to strength or determination. She walked at 10 months and literally dances now. She chooses not to cuddle because she’d rather stretch and move and wonder at the world. For the first few months, it was so hard for even me to connect to her. The only face she presented to the world was one of sadness or anger. Today – she smiles and laughs and sings. She loves books and believes she can read them. Music fills her and she bounces and claps and twirls to its rhythms.

Ours is a love story – but she made me earn it.

All babies fuss. All babies cry. But most babies give you some beautiful sweet spots in between. Mira didn’t. Not many anyway. Not in those early months. But I appreciate the sweetness of her now all the more for it. No man appreciates water like he who has known the deepest thirst. It’s like that for us.

That’s our story. Hang in there and know that it does get better. It does get easier. Whatever you are going through now will end – and you’ll always be able to remind him or her of this when he or she is older. It might get you some incredible mother’s day gifts.

Peace to you this Mother’s Day and love to my own mother. She wrapped me in patience during my own colic then reminded me through Miriam’s that we rotten babies can turn out OK.

Heidi shares a chunk of wooded hillside in the Black Hills of South Dakota with her husband and daughter, Miriam Scarlett. When she’s not working at her real job in marketing, she’s splitting her time between a master’s thesis, a mostly done novel, two needy cats, a garden and a 100 pound Alaskan Malamute. The two blogs she started were quickly abandoned when she remembered her daughter never sleeps. Please subscribe to them. Her daughter sleeps now. You will be the incentive for her to write again.

You can find Heidi at Finding the Sacred in a Common Life and The Making of a Novel, or on Twitter.