Jeni’s Story: A Moment of Bliss 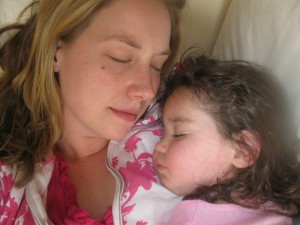 Before I had my daughter, I was so ready to be a mom.

My husband and I decided on the month we would get pregnant and executed our plan flawlessly.

I was that obnoxiously happy pregnant woman. I never had morning sickness, I only gained twenty pounds, and I was at the gym the day before I went into labor.

Most of my friends do not have children yet, and they kept asking me if I was afraid to give birth, or to have a baby, and I honestly said no. I, the queen of anxiety and stress, was not afraid of any of it.

I thought to myself, “I was meant to be a mom. I got this.” I had never felt more confident about anything in my life.

One day while doing some shopping at Ikea, my husband and I stumbled upon this Gustav Klimt print of a mother and child. The baby was nestled against the mother’s bare chest and they both looked serene, blissful, and utterly content. We bought that picture and hung it above our daughter’s crib.

It seemed like the perfect image to reflect what I was about to experience, and I grew even more excited to meet my baby and begin this perfect life.

And then my daughter was born.

I tell people now that she came out crying and didn’t stop for six months, and as much as I wish this were an exaggeration, it is almost entirely true.

She cried the whole time we were in the hospital and continued once we got home.

She wanted to nurse constantly and it never seemed like enough.

Soon, I would realize that it wasn’t enough, but for that first month that I stuck with exclusive breastfeeding, I had to nurse her twelve hours a day until my nipples nearly fell off.

Right from the beginning, I knew that something wasn’t right.

Meanwhile, I was living in a sleep-deprived, crying-induced fog, and I couldn’t shake the nagging feeling that I’d made a huge mistake.

For those first few months I felt trapped by my baby, physically and emotionally. I spent my days nursing and crying and walking around the block with my fussy baby strapped to my chest because it was the only thing that made either of us happy.

I waited in the driveway for my husband to get home, so I could hand her off to him and spend five minutes not touching another human being.

I slept with her on my chest every night even though I knew I “wasn’t supposed to.”

I held her while I went to the bathroom, and my husband and I took turns eating dinner so one could rock her while the other one ate.

We never left the house because she hated being in the car seat rather than my arms. And when I was being completely honest with myself, I did not feel a sense of bliss when I looked at my little girl; I felt like she’d taken my life and replaced it with her own, and I resented her for it.

I had imagined the first few months of motherhood to be filled with blissful moments of effortless breastfeeding, a cooing, happy baby, and a sense of accomplishment and purpose.

I thought having a baby would make me content and that everything about it would just feel “right.” I thought it would be just like it was in that Klimt painting above the crib she never slept in.

There were days when I would sit on the couch in her room, nursing her for the umpteenth hour and stare at that painting, feeling like I’d been duped, like it wasn’t telling the truth about motherhood, or at least, it wasn’t telling my truth.

Motherhood turned out to be a lot more awkward, clumsy, exasperating, and thankless than I ever could have imagined. I didn’t feel like the Earth Mother I’d always envisioned myself as, and realizing that I wasn’t as good at this job as I’d thought I would be was a big blow to my ego.

Of course, the illusion of motherhood I’d created in my mind set me up for failure, but having an especially fussy baby didn’t help either.

I had to accept that my experience was not going to be like my mother’s, or my sister’s, or my friends’.

This journey lasted about a year, and in that year I battled postpartum depression, fed my baby breast milk every day (though she would rarely take it from the source), taught her to sleep in her own crib, and learned how to enjoy her and love her in the way I’d always hoped to from the beginning.

Now that my daughter is two, it’s been a while since I thought about that painting and all the lies I thought it told me.

Then, a few weeks ago, I took this picture of me and Ella lying on the couch. It was a rare moment of unexpected quiet and tranquility. Never mind that she’d been screaming fifteen minutes earlier because I wanted to change her diaper.

Forget that she’d already refused to let me brush her hair, or that she’d pinched me as hard as she could for no reason. In this moment, this very moment, we are happy, and I realized that a photograph or a painting is just a snapshot of one moment.

Anyone can take a good picture, but real life is more complicated than that. A picture’s worth a thousand words, but there’s a lot it leaves out, too.

It doesn’t tell you what’s beyond the frame, and mothers of fussy babies forget that sometimes. No one’s experience is perfect, but for all of us, there are moments to celebrate and treasure along the way.

Motherhood was not instant bliss for me, and for a long time I felt guilty about that, but I think mothers spend too much time feeling guilty instead of enjoying the tiny victories that each day brings.

The picture above is an example of that kind of victory. A warm person nestled against me who loves me more than anything in the world even though it took me a while to love her back.

This is our moment of bliss, and I am trying to relish it.

Jeni Bonaldo is a teacher, wife, and mom living in Connecticut. She spends most of her time trying to keep her daughter from drawing on her students’ essays and wishing toddlers knew about sleeping in on Sundays. She wants to be a writer when she grows up. Until then, you can find her at www.youandmeandellab.blogspot.com

Jeni’s Story: A Moment of Bliss