My daughter screamed, on average, 20 hours a day, for four months.

Forty-five minute increments were her regular stretches of sleep. My husband and I would high-five if we got an hour and a half stretch. 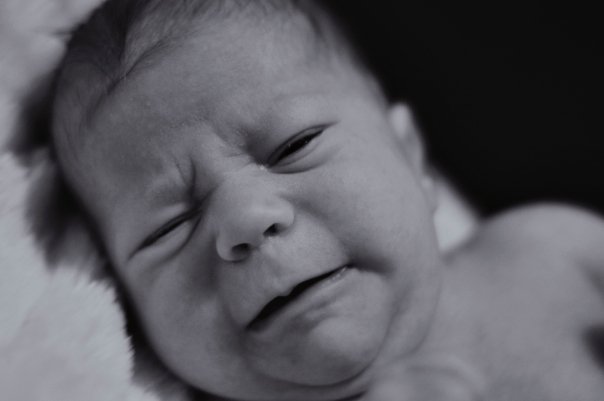 All of my friends had happy, cooing, smiling babies.

I had El Screamo.

There was no one to commiserate with, or to vent to, who could really understand. I felt so alone. What I needed was a colic primer. But there isn’t one. So here it is. My own version of one anyway. For any one who is going through the torture of colic, I offer what ever wisdom I can possibly impart. I understand. I’ve been there.

Try to go easy on misguided people who are just trying to help.

I *may* have snapped at a man at Ikea who offered up the idea that my daughter must be hungry. Perhaps, “I just ripped my boob from her face about 3 minutes ago, so I’m sure that’s not it, but thanks”, was not the most reasonable thing to say in response. In fairness, he was the sixth person to say that to me that day.

Try to ignore people who tell you horror stories they’ve heard of other colicky kids.

You know someone whose son had colic for two years? Super. How is that supposed to be helpful? And really, if it lasted for two years, it wasn’t colic.

Ignore people who tell you it peaks at six weeks, or two months, or three.

Nothing is worse than staring at that date on a calendar, only to have it come and go, while your kid remains colicky. It will get better. But no one can tell you when. Just get through today.

Release yourself of the guilt.

It wasn’t that coffee you had or that fight you and your husband had when you were pregnant, or your labour and delivery experience, that caused the colic. Your baby doesn’t hate you. You’re not doing anything wrong. They’re just having a much harder time adjusting to life outside the womb than the average kid.

Remember you and your spouse are on the same team.

He works all day and comes home to a stressed and exhausted wife and a screaming baby. Meanwhile, she’s just spent her whole day with said screaming baby. It really is equally hard on both of you.

It’s so easy to be resentful. You can’t take out your frustrations on your baby, so the natural thing is to take them out on each other. But you need to lean on each other.

None of it may work, but at least you’ll know you tried. I’m a huge believer in eliminating all variables.

Have other people hold your baby.

I can’t count the number of times I passed off my little screamer to willing friends and family.

If you’re alone, there is nothing wrong with putting the baby in a safe place and walking away for a few minutes to regain your sanity. The baby is going to cry anyway and your ringing ears could use the break.

Do stuff for yourself.

Go for walks on your own when you have someone to watch the baby. Go to a local coffee shop or get a manicure. Do something, anything, to remind yourself that you are an entity separate from this screaming being who is ruling your life. You need to take care of yourself before you can take care of anyone else.

You can’t spoil a newborn and anything learned can be unlearned. No one has been known to still be sleeping in a swing in kindergarten, or accept their diploma from the comfort of the Baby Bjorn.

Worry about those things later. For now, it’s all about survival.

My mother told me in those days, even though I didn’t realize it, everything I was doing and experiencing, was helping to create the person my daughter would become. I was tending to her needs, even though it felt like I was resenting her and just going through the motions.

But now, I have a secure, sweet, kind and hilariously funny two and a half year old.

I can say with all confidence that I wouldn’t give back one day of colic to change who she is now.

Leslie lives in Toronto with her husband, her 2 and a half year old daughter and 5 month old son. She is presently on maternity leave and enjoying the hectic and harried life with two young children.

Previous Post Annilee’s Story: Having a Baby with Dairy Intolerance Next Post Letting Go of Expectations: Accepting Your Fussy Baby