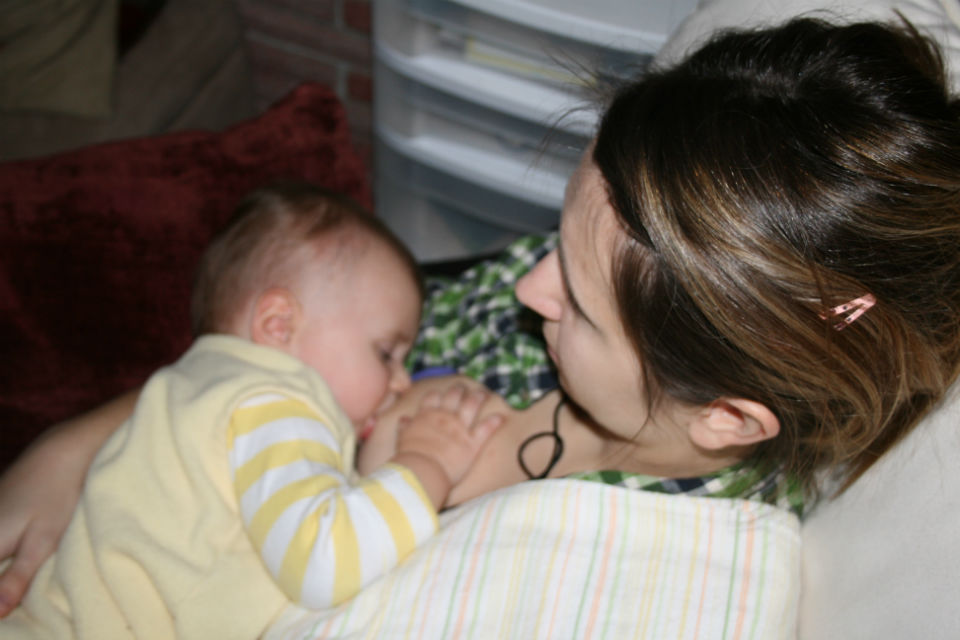 Long before I ever got pregnant, I knew that breastfeeding was definitely for me.

Not only did I want to give my daughter the most customized nutrition possible, but I wanted the experience of breastfeeding.

I wanted to hold my baby close to me in the middle of the night and marvel at the wonders of my own body.

I wanted to have those special moments with her that no one else could give her but me.

I come from a house of breast feeders. My mother breastfeed my sister well into toddlerhood, and my sister produced so much milk while nursing my niece, she needed a second freezer.

I assumed my experience would be as positive and effortless as theirs- that both my baby and I would fall into breastfeeding like we were just programmed to know how to do it, and that I’d have enough milk to feed the neighborhood.

Well, as always, nothing in the world of the fussy baby goes as planned.

At first,  my daughter used me as a pacifier, the only pacifier she was truly interested in.

For the first month of her life, I nursed her about twelve hours a day.

I remember how after she was born the nurses in the hospital told me to keep track of her feedings by writing everything down- the time, how long she nursed, and which side- and so I continued to do this once I got home.

I think it was about day three of marathon nursing when I finally wrote “ALL THE TIME!” in that notebook and threw it across the room.

People kept telling me that I needed to get her on a feeding schedule, that she should only be nursing every three hours, and while I knew that nursing for an hour, taking a break to shower, and then starting all over again was not normal, I didn’t know what else to do.

If she wasn’t nursing, she was crying.

I started seeing a lactation consultant who talked about babies getting “milk drunk”- that beautifully blissful moment after they nurse where their eyes roll back and a tiny stream of milk trickles out of the side of their mouths as they smile and drift off into either sleep or contentment.

I told her that never happened. My baby was never “blissful” or “satisfied” or “content.”

The best I’d ever seen was “slightly less grumpy,” or “too tired to fuss anymore.”

She looked at me with genuine pity and told me to give my baby formula.

When I started pumping, I realized I wasn’t making enough milk. There are women out there who will tell you that if a woman is exclusively breastfeeding, that this is rare and highly unlikely, that our bodies are designed for the supply and demand of breastfeeding.

So, about five weeks after she was born, we gave her a bottle of formula, and she downed that sucker like candy.

I’d hoped that supplementing would be the answer. That perhaps I didn’t have a fussy baby at all, just a hungry one.

Unfortunately, the fussiness continued, but at least I had a little more freedom.

Breastfeeding a fussy baby is emotionally taxing because you don’t feel as if you can ever be away from her for more than an hour (or ten minutes in my case).

As her only source of nourishment, I felt shackled to this screaming person in a way that my husband didn’t.

When she finally had another food source, I felt a freedom.

Someone else could take her for a little while. I could go to the store, or to see a friend, or to the gym by myself.

The first time I ever left the house without her, I realized that we hadn’t been more than twenty feet away from each other in over a month.

Having a little distance gave me the chance to recharge and return as a better mother.

The bottle certainly did not fix all of our problems, and it even added new ones.

Once she experienced the ease of an artificial nipple, she no longer had any interest in the real thing.

While I was thrilled that the marathon nursing sessions were over, I’d lost the one great tool to easing her fussiness.

Before I could nurse her on an empty breast to her heart’s content, but I couldn’t use the bottle in the same way.

In my efforts to continue breastfeeding at night (something she still agreed to do), I started pumping five times a day, which meant I had to put my baby down five times a day and watch her squirm and yell while I tried to squeeze out a few drops.

I would often just pump one breast at a time so I could hold her with the other.

The greatest day of my life came when I found the hands-free pumping bra, and was able to give her my full attention, which was the only thing she truly wanted.

At around ten months, I decided the milk factory was closed.

Even though the experience had brought me more heartache than satisfaction, it was a difficult decision for me to make, maybe because the good moments of breastfeeding were so few and far between I wanted to hold on to them.

I’d missed out on yet another “amazing” experience that I thought having a baby entitled me to.

Having a fussy baby makes you feel that way a lot, that other people have experienced things that you haven’t, but the truth is that everyone feels that way, fussy baby or not.

Every baby finds a way to let her parents know that “this ain’t gonna be like in the movies.”

Breastfeeding was not as easy as I thought it would be, but I did it, and not because I felt some moral obligation to, but because I really, really wanted to.

This post is not meant to encourage breastfeeding. It would be a pretty sorry endorsement if it were.

Nursing is and should be a personal choice, especially for women with difficult babies who need to find a way to make themselves and their babies happy.

For me, nursing for 10 months felt like a real accomplishment, a feeling I cherished in a year were it seemed like I was doing everything wrong.

I kept doing it for a lot of reasons, but mostly because sometimes, in the middle of the night, when she and I were alone in the dark living room, my daughter would reach up her little hand and stroke my neck, and for one moment I felt like I knew what I was doing.

Jeni Bonaldo is a teacher, wife, and mom living in Connecticut. She spends most of her time trying to keep her daughter from drawing on her students’ essays and wishing toddlers knew about sleeping in on Sundays. She wants to be a writer when she grows up. Until then, you can find her at www.youandmeandellab.blogspot.com