It’s been a few years since we were at the height of our son’s fussiness, and admittedly, much of what we went through has started to fade from our memories. I honestly didn’t think it ever would, as it was one of the most difficult things either my husband and I had ever been through.

I would never have imagined that something as common as colic could impact a family to such an extent. Had I not experienced it firsthand, I would probably still have no clue.

And it wouldn’t have occurred to me that guilt could play such a major factor. Colic, crying, fussiness – it’s so common! An estimated 20% of babies have colic. So why on earth would a parent feel guilt over this? Obviously colic is not caused by anything we are or aren’t doing as parents. Obviously.

Yet not obvious at all when it’s happening to you.

The Condensed Story of Our Encounter with Colic 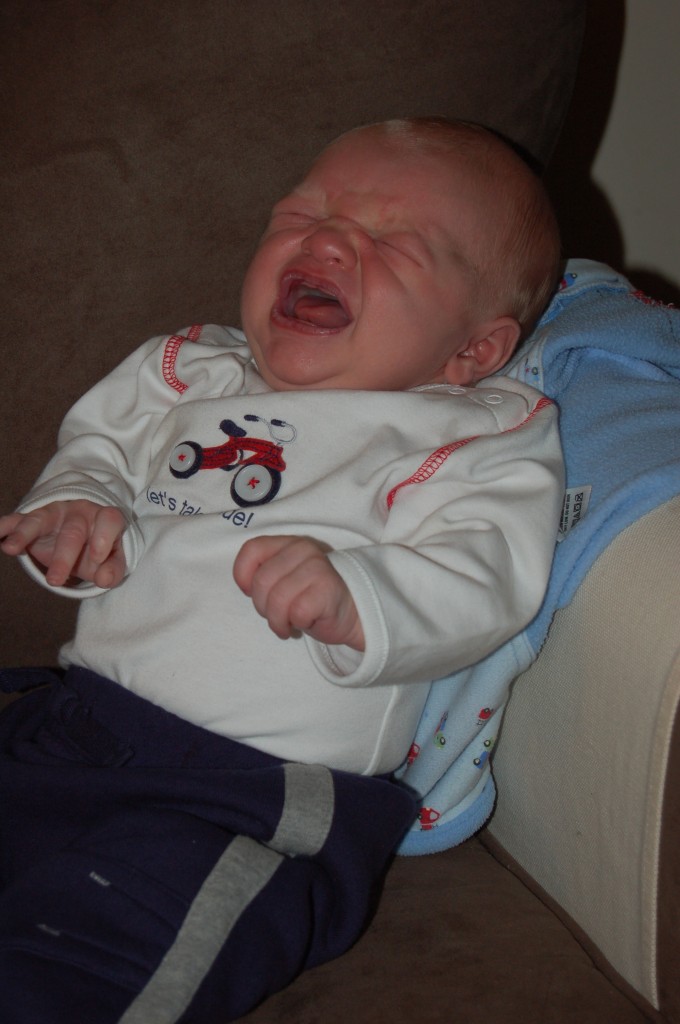 Sammy was born on a stormy November night after a very civilized and manageable labour. Immediately after his birth, the crying (screaming) started. He latched on immediately which was a blessing, but every time I’d try to take him off and put him down he’d start up again. I remember nursing him for hour upon hour, and then finally the both of us falling asleep on the hospital bed. I also remember the nurse waking us up to move him to his crib, and the screaming starting again (I will never forget that nurse!).

Within a few days, it became very obvious to us that Sammy wasn’t going to be the baby we dreamed of having. Our first child, a daughter, had been a bit fussy, and we thought maybe this time, being that we were more experienced and more relaxed, we would get our easy baby.

But from the very beginning, everything seemed to be a challenge with Sammy. He slept in very short stretches, and this only after elaborate soothing routines that involved everything but standing on our heads. When he woke up, there was no cooing or gurgling, only screaming. I wanted to exclusively breastfeed, but it was proving to be a huge challenge. He seemed to want to nurse, only to arch his back, screaming, and push away after a few seconds. It was hard to know whether perhaps I wasn’t making enough milk, whether I had too much milk, or whether he was reacting to something I was eating.

When he was awake, he was screaming. Our days were spent walking, carrying, bouncing, jiggling, strolling, driving, swinging, soothing, and feeding. Forget standing still! Literally the only reprieve we had was when he was asleep and for 10 minutes at night during his evening bath.

To be honest, many of the memories of those days have faded for me. While I know the memories (largely through sharing them on a daily basis through this site), the feelings have faded. I am thankful for that, because they were some of the most gut-wrenching feelings I have experienced.

One of the most salient memories, however, is of the guilt. Absolutely overwhelming, utterly all-consuming, guilt. Guilt that I carried as a physical sensation during Sammy’s first few months. Yes, I was exhausted, sleep-deprived, and beyond frustrated. However it was the guilt that almost got me.

I wish I could tell you how I got over that guilt, because that would be a very helpful piece of info. I don’t think there was anything I did that helped, except the passing of time and Sammy getting better.

Looking at the guilt now 4 years in the past and out the other side, I do have some tips for managing (not getting rid of) the guilt. Take them for what they’re worth.

3 Ways to Manage Guilt When You Have a Fussy, Colicky or High Need Baby

What can you add to this list? Have you struggled with feelings of guilt? What advice would you give other parents dealing with this issue? Tell me in the comments below!