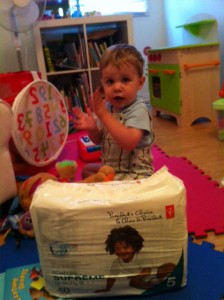 When I decided to test out PC Diapers I was skeptical. In general, when it comes to diapers, I do not like store brands at all. I’ve had some pretty bad luck with diapers, and given that my wonderful 16 month old is a pretty heavy-wetting kid, I was ready for leaks.

Then, the first day of testing them out, my son got a gastro bug. I was changing super messy diapers super often. If these diapers could survive my kid’s gastro, I’d be sold.

PC Diapers are advertised as being “fragrance free,” “soft blanket like,” and “super absorbent.” All of these features are important to me as a mom and a consumer, but none more than the latter of the three.

My daughter never leaked out a diaper in her life. It took testing out 2 store brands, and both big national brands, and combinations of types and sizes of overnight diapers, to find a diaper my son would not leak through regularly. And even with our diaper of choice, if I get lazy and wait longer than normal to change him, I’ll end up with a diaper leak.

The PC Diapers are surprisingly thin. A lot thinner than my usual brand. This was a feature that I liked off the bat, but also one that made me really question whether or not they’d be able to hold up.

Unlike my usual brand, they are truly fragrance free and they are much softer. They don’t have that plastic feel that I find characteristic of every store brand I have ever tried, which differentiated them for me and made them automatically preferable.

Personally, I couldn’t care less if my diapers have Winnie the Pooh or Mickey Mouse and I’m sure that it helps keeps costs lower for consumers to not have trade marked characters adorning diapers no one sees while they’re being worn anyway. I like the musical instruments on the PC diapers. They appeal to both the music lover in me, and the mother of a child who likes to bang on everything as if the world is his drum.

As it turns out, not only did the diapers survive the test, they actually exceeded my expectations.

The whole week, gastro and all, we didn’t have one leak. I really began to appreciate the softness of the diaper as well as how much less bulky they are than my usual brand.

The only thing I didn’t love about them was the fact sometimes the front of the diaper would pull in.

I wasn’t disappointed in my usual brand and I still think it’s a perfectly good diaper. But, as it turns out, PC Diapers are just as good in some areas, and better in others. The fact they are also much more affordable than my usual brand means that this mom is likely going to pick up a box the next time I’m at my local Real Canadian Super Store.

Although this post has generously been sponsored by President’s Choice, the opinions and language are all my own.

5 Ways To Keep a High Need Baby or Toddler Entertained

Our Review of the Sleepy Stroll

Previous Post Christine’s Story: When 1 + 1 is the Loneliest Number of All Next Post The Dangers of Sleep Deprivation and Melatonin Use in Kids