Do you wear your baby? Me & Sammy…Man, I look exhausted

Parents of fussy, colicky and high need babies often report that their babies do best when they’re being carried or held. Although at first they may resist (strongly) being in a sling, wrap or carrier, many will settle in after a bit of convincing.

Because these babies often resist change or transitions of any kind, it’s no big surprise they would appear to dislike being in a sling or carrier.

However if you can manage to figure out a process to convince your little one that this “REALLY IS just like being back in mommy’s tummy”, I promise, your life just got a lot easier.

My son at first appeared to HATE being in a sling or carrier. We tried many different kinds (ring sling, pouch sling, soft carrier, etc.) and he would scream bloody murder when we put him in.

BUT, I was determined to make this babywearing thing work. I saw so many moms at the park and mall wearing their newborn so they would have their hands free to deal with their older kid(s), and I wanted that.

After more than a few attempts, we finally figured out a process that worked to get Sammy into the carrier, and it actually quickly became a lifeline for me. I could again take my daughter to the park, playgroups, and on walks, and not have to worry about Sammy squawking the entire time.

I would argue however, that wearing a fussy baby is NOT the same as wearing an ‘easy’ baby.

‘Easy’ babies tend to settle in immediately, content just to be close to mommy (or daddy). ‘Fussy’ babies on the other hand, tend to protest loudly being squished into a carrier. Mind you, these babies often protest pretty much everything, so this is not a big surprise.

That said, here are a few tips you can try to convince your fussy baby that she loves being worn!

Don’t expect that as soon as he or she goes into the carrier, the crying and fussing will stop. In many cases, it will actually ramp up for the first few minutes. Your instinct may be to say, ‘Well, we’ve tried it, and she hates it‘, and take her out. This is what I did with my daughter, and I regret it now.

Now’s your chance to convince her she LOVES it (and maybe even that it was HER idea in the first place).

The Bounce and Butt Pat

This was the first stage in my babywearing routine. Once he’s in the carrier, chances are, he’s going to be FUMING MAD.

Walking around with him at this point is probably not going to calm him down. You’re going to need to take it to the next level: Bounce at the knees while briskly patting his butt. A loud ‘shushing’ in his ear also helps at this point.

If possible, go outside at this point, even if you weren’t planning to leave the house. Something about the cool air, the different sights, smells and sounds can work in your favour here.

Continue the bounce and butt pat as you walk around outside. Just DON’T. STOP. MOVING!

Which brings me to the last stage of the fussy babywearing process:

Unlike with easy babies, you may find that as soon as you stop moving your little one wakes up, screaming. So, you may not be able to sit on the park bench while wearing your baby, but I bet you’re OK with that, given the alternative. 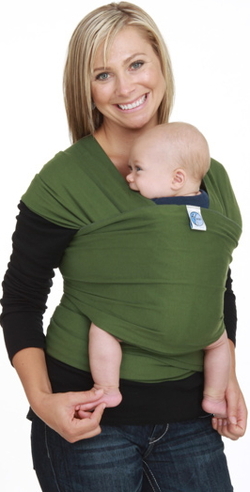 So, are you ready to try wearing your fussy baby?

Well.ca has generously offered to award one our Canadian readers a Moby Wrap carrier from their website, up to a $79.99 value. Contest closes Monday, March 26 at 5pm PST. You’re eligible for this contest if you:

To enter, you just need to tell us why you love wearing your baby – or if you haven’t tried it yet, why not?

Leave your answer in the comments below!

Getting Things Done with a Fussy Baby