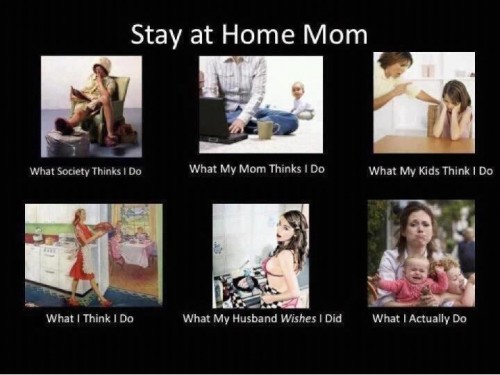 I saw this meme a few months ago. It shows the difference between what the outside world thinks a stay at home mom does, and then shows what it’s really like.

I admit that, until I had kids of my own, I wondered what in the world parents did all day at home with their kids. I thought it was a sweet privilege that people could have the kind of money to make it possible for them to sit at home and do nothing all day.

That meme pretty much summed up exactly what I thought: being home is an extended vacation.

Turns out this was another on the long list of pre-parenthood thoughts and assumptions that were more a reflection of my ignorance than any reality.

The joke is, a parent who stays at home with their children full time is not just a parent.
A Stay At Home Parent is also;
-A teacher
-A principal
-A cook
-A clown
-A housekeeper
-A psychologist
-A tour guide
-A mediator
-A lawyer
-A judge
-A nurse
-A cruise director
And umpteen other roles my mind can’t even articulate into a word that fully encompasses the job requirements.

I have now done two maternity leaves, and in between the two, I was a mom who worked outside the home. Juggling shift work and a family was hard. Being effective at work on limited sleep and a whole lot of energy expense when I got home, was hard. Still having my synapses fire and be able to speak in adult speak after coming home and talking 3 octaves higher and in mostly single syllables was a challenge.

But none of that holds a candle to how much harder it is to be a stay at home mom.

As someone who has seen both sides, and admittedly on a limited basis (I had to keep my older child in daycare to both maintain her spot and guarantee my son’s), I can say that being a stay at home mom is, by far, the most under-appreciated job on the planet.

It’s so under-appreciated that it is most commonly referred to as ‘deciding not to go back to work,’ as if the fact it’s not paid and doesn’t involve putting on dress pants some how makes it ‘not work.’

If I mess up at at the office, my boss gets mad.

If I mess up at home, I screw up my child!

My boss, when I’m at home, doesn’t give me coffee breaks.

He doesn’t guarantee me, offer me, or even allow me vacation days.

He doesn’t care how badly I need to go to the bathroom.

If he’s in a mood, that’s going to be my problem.

If I’m in a mood, that’s also going to be my problem.

My boss is a micromanager. Every second of his day better be planned to a T. He needs to be in charge, and he needs my constant attention.

My boss is unpredictable. His mood can go from good to raging mad at the drop of a hat. And he has no higher authority I can complain to when I’m harassed by him.

My boss under-pays me, under-appreciates me, physically and verbally assaults me, throws the meals I prepare for him at my face and on the floor if he disapproves and my scheduled breaks (read: his naps) are at his discretion in both length and frequency and over all consistency.

The biggest difference between the boss at home and the boss at the office is that I love my boss at home with every ounce of my being. There is nothing I wouldn’t do to make him happy. Nothing that can be happening, no day that can be full of stress, that his ear to ear 6-tooth smile won’t make disappear, even for just a minute.

He is my everything.

And maybe that’s why I can say that I’m not cut out to be a stay at home mom. And that that’s okay.

Because I acknowledge that it’s the hardest job on the planet.

I’m not cut out to be a doctor either. That doesn’t mean I’m not going to tend to my kid’s cuts and bruises and bumps. But for the big stuff, the stuff that I’m not qualified for? That stuff I’ll defer to the professionals. When something is beyond my scope and capabilities, like a serious cut, I wouldn’t feel guilty saying ‘that cut needs stitches and I don’t know how to do them.’

So I won’t feel shame in saying that I’m not cut out to be a stay at home mom.

That doesn’t mean I love my children any less than parents who do choose to stay at home. It means I love them enough to know that it is not in their interests or mine for me to stay home.

And I also now acknowledge, from meeting lots of amazing moms across this country, staying home wasn’t necessarily made possible because of one spouse’s massive salary.

Some people make sacrifices, huge sacrifices, to stay at home with their kids. Because it’s where their passions are, and what they want to do. Just like other people do to take jobs in other fields that aren’t highly paid because they love the work.

Anyone who thinks being a stay at home mom isn’t work hasn’t done it for even a day.

I have nothing but the utmost respect and admiration for stay at home moms, not just because of how hard their job is, but because they do it in spite of knowing that most people don’t consider it a job at all.

I guess that’s what you do when you’re passionate about something. You do it in spite of what others think.

And I guess that’s also why it’s okay for me to say it’s not my passion. That it’s too hard for me, and not something I’m very good at.

And that doesn’t make me a bad parent. It just makes me a not-so-great stay at home mom.

What to Do About Sibling Fighting