After a nearly two year struggle we were finally pregnant with our first child. Other than gestational diabetes I had a trouble-free pregnancy.

At 39 weeks the doctor decided to induce labor out of fear that I wouldn’t be able to deliver her. I’m rather petite (5’1″ –
105lbs) and in December 2008 I naturally delivered a healthy 9lb baby girl we named Claire Elise. Everyone talked about the “sleepless nights” that were on the way but in the beginning Claire was a dream…that is, until the day she turned three weeks old. Then, our world turned upside down.

During the day, her caregiver said she ate and slept beautifully. Unfortunately we never got to enjoy that side of her because that was while we were at work. At around 7pm every single day she would begin screaming and did not stop, some nights until 4am.

At her one month appointment, we were already so exhausted from that week of not sleeping so we asked the doctor what we were doing wrong.He went over the details of her behavior and concluded she had colic.

I actually had severe colic from birth until seven months so I was instantly fearful that it was a bit of karma’s revenge for the agony I put my own mother through. Night after night after night we were pushed to our limits. Our perfect life and our perfect marriage were falling apart. We were floored how much of an impact one little 11lb baby girl could have on two full grown adults.

There were many words exchanged between my husband and I during her “colicky months” that we can never take back but we both know it was a direct result of complete fatigue, extreme frustration, and total desperation. I transformed into a totally different person and to this day am amazed at how close ‘to the edge’ I really could have been pushed by our sweet little girl. Mind you, I think she’s sweet now, at that time I could hardly bring myself to tell her “I LOVE YOU” because I wasn’t completely sure I did. I was doubting our decision to ever have a baby and worried that the insanity would never end.

Fast forward two years and we decided it was time for another baby. Granted, our first experience with a colicky baby was horrific, nearly deadly (hehe) but NO ONE is cursed with two fussy babies right? I am here to tell you that theory is WRONG WRONG WRONG! 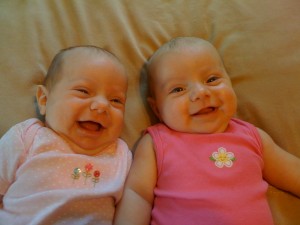 Our second pregnancy was nothing short of shocking. At our 9 week appointment the doc casually, cooly, calmly tells us “it’s twins”. Twins. TWINS. That appointment is etched in my mind for all of eternity. I had my suspicions that it could be twins but didn’t truly believe he would ever say those words to us. I already had a little belly forming at 9 weeks and was so insanely ill and fatigued every single day that either I had more than one baby in there or I was dying a slow painful death.

This pregnancy, clearly, was nothing like the first and after 8 months of every complication imaginable my identical twin girls Charlotte Leann and Sophia Louise were welcomed into the world via cesarean in May 2011. Let the troubles begin.

I firmly believe (it is now the end of August 2011) the fact that the girls had to be rushed to Children’s Medical Center about 2 hours away is part of the reason my little Sophia is so clingy.

Charlotte is exactly what I had always hoped for… she eats, she sleeps, she sits in her bouncy seat and watches the world with a smile. What a dream. Sophia is a combo of her older sister and her twin sister. She doesn’t scream constantly but she doesn’t feel content unless she’s in my arms, on my chest, in my bed, etc. I have taken off work MANY a-day just to sleep after pulling an all night marathon of rocking/shooshing/bouncy that little monster.

Just this morning, I jokingly told my husband that it’s time to admit it, Sophia just isn’t gonna make the team and it’s time to let her go (my husband used to be a football coach). He half smiled and then gave a look that implied he had already considered this idea.

I’m truthfully only getting through this current episode of fussiness because of these things:

Anti-Depressants: I learned from my experience with our first daughter that post-partum depression is real and it can be devestating if you allow it to get out of control. So, I went to the doc around the time that I found myself packing a bag in the middle of the night sobbing that I couldn’t take it anymore. I still WANT to pack a bag and run away, but I’m no longer actually doing it!

Support: My husband needs me and we are in this together. He is a God-send and would do anything and everything for his girls … the least I can do is be his devoted supportive partner and together WE WILL get
through this.

I’ve seen it DOES get better. My oldest daughter is the light of my life so I know, without a
doubt, eventually my home will be filled with giggles and delightful squeals. We will get there in time.

THIS TOO SHALL PASS. I know this statement is true, I just have to hold on for the ride. Once it’s over I can look back and be amazed that I survived.