Restaurant Gives Discount for Kids With Good Behaviour: A Good Idea or Not? 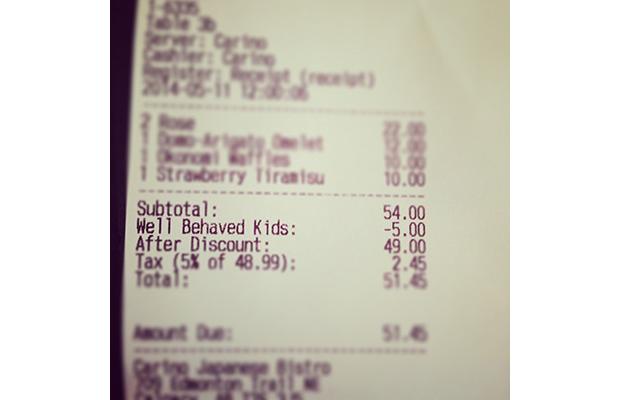 A photo originally posted on Reddit has been flying around my Facebook newsfeed the past couple of days. It was also the subject of some pretty heated debate on my favourite talk radio show yesterday, and I’ve been thinking about it all ever since.

Before I give you my thoughts on it, here’s a summary of the story: For the past year, a restaurant in Calgary, Alberta (Canada), has been giving out discounts to customers whose children behave well.  In an interview with Global News, owner Toshi Karino says that the intention behind the discount has been to reward families who engage together over dinner, rather than arguing or spending time on their phones. He says, “We want to show some appreciation for the kids and parents, if they don’t make [other diners] uncomfortable.”

The comments I’ve heard in the media have been quite mixed, with many parents of ‘easy’ kids agreeing with the policy (not surprisingly) and parents of more ‘difficult’ or ‘spirited’ kids feeling like this policy wouldn’t give them a fair shake.

Apparently, the restaurant doesn’t advertise their policy, and did it ‘on the sly’. This way, parents who didn’t receive the discount wouldn’t feel bad. Now that they’ve received so much media attention however, the owner states they will likely have to revisit their policy.

As the parent of a child who was, to be quite a honest, a total and complete pain in the butt at restaurants from the age of about 6 months to 2 or 3 years 0ld, I should maybe be offended by the policy. I’m not at all, however.

We’ve worked hard – really hard – over the past 10 years at making sure our kids behaved appropriately at restaurants. We have always been cognizant that restaurants are a public place where people go to relax, enjoy and meal, and oh, I don’t know, not have a child screaming bloody murder in their ear.

That said, we’ve also had to be very aware about what our kids can handle, realistically.

When Sammy was in his particularly difficult years, we made the conscious decision not to eat out. Shortly after he began walking, we took him for Indian food (his and our favourite) in Vancouver. I remember he walked from table to table, trying to sample food from the other patrons’ plates. He wouldn’t sit still, and protested (loudly) at the idea of sitting in a highchair for more than about 10 seconds.

It was at that point we decided – no more eating out.

By the time he was about 2, we realized his penchant for pancakes could buy us some quiet, peaceful (well-behaved) time at restaurants. So it was only at that point that we decided it was ok to start eating out again (but we also knew we only had a short time to wolf down our meal. Once the pancakes were gone, it was game over).

My point is, we recognized his capabilities and temperament, and acted accordingly. We knew for a fact he would ‘act out’ in restaurants, so we didn’t got out. Had he screamed in his highchair, run from table to table, or otherwise disrupted the other guests, I wouldn’t have blamed them for being annoyed.

When we did chance an outing and one of our kids (okay, Sammy) did behave in a way that could have disturbed other guests, one of us either walked around with him, took him outside or waited with him in the car. I never saw a reason why other people should have to be disturbed by something he did.

I didn’t blame him, mind you: although it was certainly frustrating to have him tantruming, crying or screaming in a restaurant, we knew he was too little to understand what he was doing, and was only expressing his displeasure with being confined or prohibited from doing what he wanted.

The onus was on us, not on him, to take the appropriate measures to deal appropriately with his behaviour.

I’m curious what you think about the ‘good behaviour discount’, and how you handle restaurants with your fussy, high need or ‘spirited’ child.

Do you go out to eat? Do other patrons get on your case about your child’s behaviour? Do you think people need to be more compassionate and tolerant of our kids’ behaviour in restaurants?

Restaurant Gives Discount for Kids With Good Behaviour: A Good Idea or Not?

Previous Post Rare Causes of Infant Fussiness Next Post Baby Cries All Day: Is it Possible to Have All-Day Colic?