Santa with the Dark Cheeks

As I mentioned in a previous post, fussy babies often make for amazing children. Don’t take my word for it. If you look at the literature out there, you’ll see that you’re in for a real treat. But don’t go supposing amazing means easy. 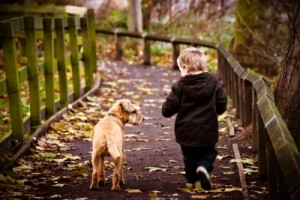 Forgive me for saying, but I liken a spirited child to a smart dog.

Yes that Border Colly will delight you alright with his amazing intelligence, but unlike the dummer breeds, he’s going to drive you absolutely mad with his intense energy and need for stimulation.

I know, because we have a Portuguese Water Dog. We should have bought a Bulldog.

One of the amazing personality traights of a formerly fussy baby (i.e. spirited child) is their acute awareness and perceptiveness. At three, Chloe is so perceptive that we have to be very careful what we say around her. She knows when what we say doesn’t jive with what she knows, so we can’t lie to her.

She’s acutely aware of when anyone says anything critical about her. And she understands what seem to us to be relatively complex concepts – like life and death.

One day, for example, I decided that it would be a good idea to be honest with her about where some of her relatives have gone. She asked, so I said:

“They died honey. We all live and we all die at some point. We don’t live forever.”

She broke down in tears and said,

In one move I had just gotten my 3 year old child thinking about her own mortality. Way to cut short her innocence Dad! I had no idea she would make the connection to her own life that easily. Kids aren’t supposed to be concerned about dying, right?

But connections are what perceptive children are all about. It’s not the noticing that matters – although that helps. It’s making the connections to everything else they know that makes them perceptive. Which leads me to yesterday.

Chloe was at her skating lessons with Mommy and, it being close to Christmas, Santa made a surprise appearance. Except, this wasn’t the Santa she was used to seeing. He had, as Chloe put it “dark cheeks.” 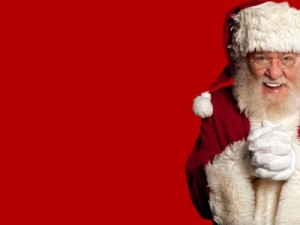 “Mommy,” she said, “Why does Santa have dark cheeks?”

She was the only one staring at Santa, giving him an uncomfortable look. The other children didn’t seem to pay any attention.

Julie, caught off guard and not knowing what to say, just said she wasn’t sure and quickly distracted her.

I didn’t know any of this little story when I put Chloe to bed that night. I asked her about her skating lessons, and she told me that Santa had come to visit, but that he had had dark cheeks.

“But Daddy,” Chloe said, “it couldn’t have been Santa if he had dark cheeks. I’ve already met Santa and he didn’t have dark cheeks….”

Then there was a pause (where I didn’t have a clue what to say) and Chloe went on,

My cue: “Chloe, I think it’s just that sometimes Santa has helpers because he can’t do it all by himself. This must have been one of his helpers.”

Meanwhile I’m thinking, great, I just made Santa’s helper the visible minority – how white of me!

Julie and I have resigned ourselves to accepting that when it comes to Santa and Christmas, Chloe’s not going to be one of those kids who still believes at 10 years old. I think we’ll be lucky if she makes it to 5. She’s just too quick at adding 2 and 2 together. She likes to know how everything fits so her world makes sense.

And as colour blind as we all pretend to be, let’s face it, we’d know if our biggest hero just up and changed colour one day.

If you have your own stories about your child’s spirited personality I’d love to hear them, and so would others on the blog, I’m sure. As parents of fussy babies, we could all use to hear a few anecdotes from time to time.

The Gift of the Not-So-Easy Baby