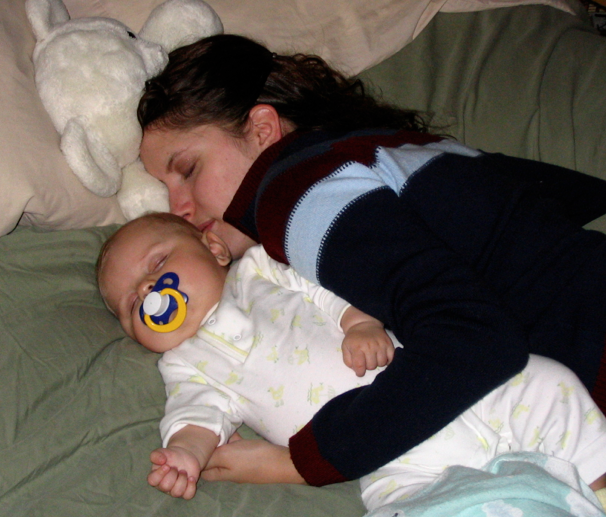 Some of my worst memories from when my kids were babies are related to sleep.

I’m pretty sure I have a tiny bit of PTSD from listening to them cry in their cribs and having NO CLUE what to do about it.

Now and again I find myself thinking, ‘I should have just relaxed and not made such a big deal out of it‘. But if I let myself remember for a moment what it was like holding and rocking a cranky, overtired, sleep-resisting, squirmy, sweaty baby, I remember why I couldn’t ‘just relax‘.

One memory comes back to me vividly and often: Aliya was about 6 months old, and as usual was resisting her nap. I had sat with her in the rocking chair for probably an hour, and the crying was just intensifying. Her little eyes were red and puffy, and it was obvious she was desperately overtired. But yet she fought.

Finally I put her in her crib, shut the door, and slid down the wall next to her room until I was in a heap on the floor. She was screaming in her bed, and I cried right along with her. After a while of this, our upstairs landlord even called to make sure everything was OK. No, it wasn’t OK at all…I was exhausted, at the end of my rope, and had no idea how to help her sleep.

So, I won’t say I have the answer for how to get your baby to sleep. There is no one answer. And with fussy babies, you all know that what works today often won’t work tomorrow.

That said, there are some basic strategies I believe often help, and can’t hurt to try. At the very least, it will give you something to try if you’re in that place of desperation.

My daughter sucked at napping until she was about a year old. But one thing she did well right from about 6 weeks on was to sleep well at night (maybe because she was so exhausted from not napping).

We noticed that the evenings were when she was at her fussiest, and really, she was just unmanageable at times. She was so obviously tired, but we were scared to put her down too early for fear she would wake up a couple of hours later, or wake up ultra-early the next morning.

What we found however, was that she usually went to sleep much easier, usually didn’t wake up several hours later, and actually SLEPT IN LATER the next morning. I have heard the same story time and time again from parents.

Marc Weissbluth, author of Healthy Sleep Habits, Happy Child and Your Fussy Baby talks about giving your sleep-resisting baby a chance to catch up on sleep at the beginning of the night, rather than expecting them to sleep in later in the morning (because we know that just doesn’t happen).

Aliya’s standard bedtime was around 6pm AIC (ass-in-crib), or even earlier if she was extra-fussy. When Sammy came along, we used an early bedtime for him as well (not right at the beginning, but once he had a bit more of a routine).

He has always been an early-riser (sometimes 4-5am), so if we didn’t give him an early bedtime, he would have been even more sleep-deprived (Note: Sam is 5 now, and regularly sleeps in until 7-8am. There is hope!).

Shorten the Amount of Awake Time Between Naps

Especially at the beginning, you’d be surprised at how much sleep these little ones actually need to function properly.

Sure, if you have an ‘easy baby’, you can get awake with a few hours of awake time. But with fussy babies, I’d definitely say the shorter, the better.

As newborns, they may only be able to handle 20 minutes of awake, alert time, and then it’s time to soothe them back to sleep (especially if it takes a while to soothe them). As they get a bit bigger, 30-60 minutes, and even as older babies, some kids can only handle 1.5 hours of awake time before going down again.

It’s crazy, but true. At least this is the way it was with mine.

If your baby is resisting naps but is obviously overtired and needs to sleep, try reducing their awake time until you notice they fall asleep a little easier. Now you’re getting closer to figuring out how long they can comfortably be awake.

Cat-Napper? Put Him or Her Down More Often

Although Sammy was the ultimate fusspot, naps were one of his (few) strong suits. I knew that if I wore him in a sling and kept moving, he would usually get the sleep he needed.

Aliya on the other hand, would not sleep in a car, plane, train, carrier, sling, in my bed, or anywhere but her crib. By herself (one of the few exceptions is the picture above).

And basically because I couldn’t deal with being with a baby who was grumpy ALL DAY, I would put her down for 4 45-minute naps each nap. Mainly because I needed the break. It was torture having to go through our elaborate soothing routine 4 times a day, but I strongly believed that sleep begets sleep, and if I just gave up and let her stay awake, her sleep would spiral out of control.

I know if you have older kids, it may not be possible for you to do this. But I’d encourage to keep trying to help them get their rest, any way you can.

Which brings us to my last strategy…

Do Whatever it Takes to Help Your Child Sleep

Will your baby sleep beside you? On top of you? Attached to you? Let him.

What about in the car, stroller, or carrier? Do it.

Don’t worry about people criticizing you or saying you’re spoiling him. Fussy babies have trouble self-soothing, yet they need sleep more than other babies. Do whatever you have to do.

There comes a time when they’re a bit older when it’s time to help them learn to self-soothe, fall asleep on their own, etc, etc., but when they’re really little and fussy, you have enough to worry about. Don’t even worry about it until your baby is at least 6-8 months old (this is my personal opinion, I know some would disagree).

We laid down with Sammy until he was about 2.5, but you know what? He slept. We all slept. And then when we stopped being able to sleep, he was old enough that we could gently teach him how to fall asleep on his own.

While I know you can’t ‘just relax’, do try to remember that this stage will pass. It ALWAYS does.

Don’t feel guilty about ‘spoiling them’, teaching bad habits, or doing whatever it is your gut tells you is right. Sometimes these are the only ways to survive this stage of infant-hood. And if your baby is older and sleep doesn’t seem to be improving at all (or if it’s getting worse!), there is no shame in talking with a sleep consultant to get some advice or help!

Are you struggling with sleep issues? Have you tried any of the strategies above? Do they work for you?

05 Jul, 2018
Previous Post Travelling with a Colicky or Spirited Child Next Post “You’ll Just Know What You’re Doing” and Other Parenting Myths