Tell it Like it is: A Father’s Perspective on Colic

When we tell the people in our lives that having two young children can be a real handful (and I’ve said this many times with a half-grin and sagging shoulders), or that we’re exhausted because our kids kept us up, what are we saying?

Why should we be surprised if our friends, our family, our colleagues, look as though they’re trying their hardest not to roll their eyes? They’re thinking, “Oh here we go again, the woe is me, it’s so hard having kids stuff.” 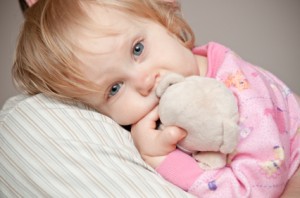 To say that raising children is difficult, or that the kid kept you up at night are such understatements that they’re meaningless.

People say the same thing when their partners’ snoring woke them up or they had heartburn at night from too much tomato sauce. Say these types of understatements enough, and people start to see them as ‘take pity on me’ types of statements.

Just imagine your co-worker tells you, “Oh I’m not doing too badly. The dog died a while back, my latest girlfriend has taken off, and my kitchen tap’s been dripping again“. You’d think, “Who cares? Why are you telling me about this? We’ve all got problems. Stop being such a downer,” and you might even start to avoid that person.

Except for many parents of young children, things are a hell of a lot worse than a dead pet or a leaky faucet. We just don’t want to admit it to anyone. What if, instead of saying, “Oh things are alright, you know, two kids can be quite a handful,” we were to actually tell the truth, and lay it out like a bad traffic accident? Let me give it a try:

“Chuck, you really want to know how I’m doing? I’ll tell you. You remember that story in the paper about how the U.S. army wakes prisoners up in Guantanamo Bay every hour or so as a form of torture, to break them down, get them to talk? That’s my bloody life. Except it’s not every hour Chuck. Last night, the night before, and every night for the past 3 weeks, that little monster who looks so cute to everyone else has been waking us up every 20 minutes….no, I’m not exaggerating. Every 20 minutes she wakes up and screams. Then it takes one of us 20 minutes to get her back to sleep – you should see the stupid dance we do. By the time we nod off again ourselves, there she is, screaming her head off like something from the Blair Witch Project, and we start all over. We take shifts, Julie and I, so each of us can get a couple hours of sleep. Can you believe I’m even here, at work? I don’t know whether it’s better to show up half-conscious or just call in sick. Either way, it’ll be a miracle if I don’t get fired. Sometimes I imagine I hear the screaming, even here, and I’m scared.”

Wouldn’t an explanation like that shock the heck out of the people you know? How could I speak like that about my own child? they’d ask. One thing’s for sure, there’d be no “woe is me” talk, but you might just get referred to the employee assistance program – and maybe that would be a good idea!

But that account, the one you may never tell anyone but your closest friend, wasn’t exaggerated in the least. For Julie (my wife), our first child’s colic led her on a path to anxiousness, feelings of helplessness, and insomnia. Eventually she became completely overwhelmed (that it took her so long to be overwhelmed by it all is a marvel).

For me, who felt I had to hold the foundations of our lives on my shoulders while dealing with a lack of sleep, job demands, and the health and security of our family, the more personal impacts of colic came later. But they came, and they stayed. When poor Emily (our second child, who never had colic) cries out in the middle of the night, my heart races, my face cringes, and I pray, please go back to sleep, please.

Colic is such a tame word. It sounds like a bad cold. But for Julie and me, colic – along with the whole childrearing thing in general, has been the greatest challenge we’ve ever faced.

And it should be challenging. We expected it to be challenging. What we perhaps didn’t expect was to be faced with such pervading myths and expectations about children, motherhood, and even fatherhood, that added obstacles to what was already a difficult trial.

One of the reasons I started my blog, No Milk Here, was to combat some of these myths, and to add a father’s voice to a discussion that takes place mainly among women – that is, caring for babies and raising young children.

I hope to bring some of my thoughts to the Fussy Baby Site blog. Chloe is now three, and of course, no longer colicky. But whatever it is that caused her colic, a certain je ne sais quoi, hasn’t left her. An intense baby became an intense toddler and is now an intense little girl.

I have lots of stories to tell.