The Myth Of “You Made Him That Way” 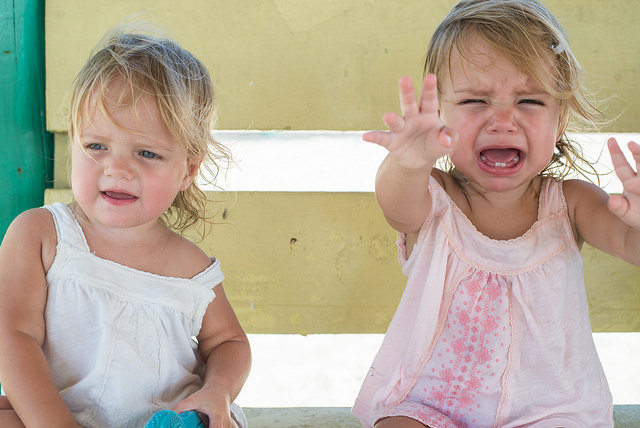 Are parents to blame for high needs behaviours?

Do you ever wonder if you caused your baby’s fussiness or high need behaviours? If so, you’re not alone. When you see other people’s babies sitting contentedly in the stroller, or sleeping through the night, or just generally being a joy to have around, it’s hard not to feel like you’re doing something wrong.

But I wanted to share an experience I had recently that got me thinking more about our high need kids, and how much responsibility we have for how they are.

I was accompanying my daughter’s class on a field trip, and got into a discussion with a fellow mom. Having ‘successfully’ raised 2 older children, she was understandably confused and saddened at now having a child whose behaviour and moods were difficult to manage.

Her older children were now basically grown, and were confident, happy adults. In fact, they had both been confident, happy children as well. Generally easy to please and easy to raise, never giving her an ounce of trouble. By all measures, she had done everything “right”.

10 years later, she was experiencing something rather different with her youngest son. Ever since she could remember, he had been generally unhappy and grumpy. While he’s extraordinarily intelligent (perhaps the smartest kid in his grade), he frequently runs into troubles following the rules and taking direction from teachers.  Despite her best efforts to set boundaries and to show him how loved he is, his worldview is still set to ‘negative’.

When you see a child like this from an outsider’s perspective, it’s easy to think things like, “There must be something going on in the home to make him like that, or “His parents just need to set proper boundaries and his behavior will improve.”

I’m completely guilty of thinking these things at times, without knowing the whole story.

As the parents of two formerly high need babies, one of whom is still ‘spirited’, you’d think I’d know better. At ages 8 & 10, my kids have completely different temperaments and personalities. They’ve been raised in the same house, by the same parents, with similar parenting strategies and styles.

We are a peaceful family. We’re not perfect, but we have tried our best from day 1 to provide a safe, nurturing home for our kids. We’ve read all the parenting books in an effort to “do” parenting in the best way possible. We’re educated; in fact, my husband is a PhD Psychologist. If anyone should know how to do this parenting thing without permanently scarring our children, it should be him.

But you know what? Our kids aren’t perfect.

Their little temperaments have been evident literally from their first day of life. Sammy came out screaming, and has approached life with that same zeal every day over the past 8 years. As a newborn, Aliya exhibited clear preferences for what she liked and didn’t like, and is still an extremely confident and determined young lady.

Although I second-guess my parenting skills and style nearly every day, I think there are things we’ve done right. We’ve always had firm boundaries with our kids in terms of being moral, kind and respectful of those around them. For us, these have always been non-negotiable.

But while they exhibit these behaviours in school, church and with friends and family, at home, we struggle at times. Our 8 year old still has trouble handling his BIG emotions. Sometimes, he feels like the world is against him, and he just wants to give up. Our 10 year old is in full-on preteen mode, complete with attitude and snottiness up the wazoo.

But do they behave this way because of our parenting? Or is it because of their inborn temperaments? At the risk of pretending like I know a ton about the whole nature versus nurture thing, what part have we actually played in the people they’re becoming?

To be honest, I don’t really know.

Certainly, parents hold some responsibility for how their kids behave. There are things we do (or don’t do) that impact the health, well-being and behaviours of our children. We all know of parents who have, intentionally or not, harmed their children because of mistakes or misguided decisions.

We also know, of course, that abuse and neglect can have a devastating effect on our attachment with our children, on how they develop as individuals.

And because we know we have an impact on how our children behave and on who they will become, we may often second-guess our own parenting style and decisions. There are always the contradictory, back-and-forth thoughts that run through our heads:

“If I’m too lenient, my kids might think they can do whatever they want.”

“If I’m too controlling, I risk having my kids feel unloved, or having them rebel.”

It seems we can never win.

As parents of high need babies, I know that this second-guessing, judging and blaming can be a major issue. People tell you (or at least think), “If she would just _________, her baby wouldn’t cry so much”, or “If they would just set firmer boundaries, their toddler wouldn’t have so many tantrums.”

And knowing that people think these things about you is just, plain, HARD.

When you’re struggling day in and day out to be the BEST parent you can be, reading and researching, trying new strategies and even adopting parenting styles you never planned to adopt, and yet your child is STILL fussy, crying and tantruming, that’s a lot to deal with. Add to this the blaming and judgements on auto-repeat in your head, and life is so much harder than it should be.

“If I put him in timeout for having a tantrum, I’ll teach him that his intense feelings aren’t okay.”

“If I let her cry while I take a shower, it will teach her she can’t rely on me.”

“If I respond to his cries too quickly, it will spoil him and ruin his chances of ever self-soothing.”

Because I’ve struggled with these thoughts myself, I’ve been doing a lot of reading and research to figure out what role we play in how our high need or spirited kids behave.

From what I can tell, what the research seems to suggest about high need kids, temperament and parenting is this: our kids are born with certain traits and propensities, and as parents, it’s up to provide a loving home with appropriate boundaries. Our children will always have the temperament they’re born with. It may change and evolve over time, however; and as we teach them new ways of coping with their temperament, the way they approach the world will likely change.

In research published in the 1970’s, we see that temperament is evident as early as a few days to a few weeks of age. This research (The Origin of Personality) found that many children had similar sets of behaviours and reactions that appeared to be independent of parenting style.

They found three general temperament categories that 65% of babies fit neatly into (the rest had bits and pieces of each):

[For more on this study, see my post Is There Really Such a Thing as a High Need Baby?]

If you’re a regular of this blog or our Facebook groups, chances are you have one of these ‘difficult’ babies, perhaps with a little bit of ‘slow to warm’ up thrown in. It’s also possible you have a baby who’s generally easy but struggles in just one or two areas; this can be challenging to deal with as well.

The study gives a case example which I find particularly interesting. Take a look and tell me if it any of it sounds familiar to you:

“Glem exemplifies a child who scored high in intensity of reaction. At four and a half months he screamed every time he was bathed, according to his parents’ report. His reactions were “not discriminating – all or none”. At six months during feeding he screamed “at the sight of the spoon approaching his mouth”. At nine and a half months he was generally “either in a very good mood, laughing or chuckling”, or else screaming. “He laughed so hard playing peekaboo he got hiccups.” At two years his parents reported: “He screams bloody murder when he’s being dressed.” At seven they related: “When he’s frustrated, as for example when he doesn’t hit a ball very far, he stomps around, his voice goes up to its highest level, his eyes get red and occasionally fill with tears. Once he went up to his room when this occurred and screamed for half an hour.”

So, if kids like Glem are born with these certain traits (which I’m sure you can now identify as being ‘high need’ behaviours), is there really anything we can do to help mold or shape them? Will they always behave in these ways? Is it a lost cause?

Absolutely not. The study suggests – and I see it all the time – that parents who are able to be firm, yet flexible and nurturing with their high need or ‘difficult’ child fair much better than those who fight against their child’s temperament. In the same way, I think it’s important for parents not to ‘give up’ on their high need child, assuming that he or she can’t accomplish certain things just because of their temperament.

In The Origin of Personality, the researchers share some useful advice on how to manage and help our high need kids:

“The parents must cope with the child’s irregularity and the slowness with which he adapts in order to establish conformity to the family’s rules of living. If the parents are inconsistent, impatient or punitive in their handling of the child, he is much more likely to react negatively than other children are. Only by exceptionally objective, consistent treatment, taking full account of the child’s temperament can he be brought to get along easily with others and to learn appropriate behavior. This may take along time, but with skilful handling such children do learn the rules and function well.”

What this says to me (and what I’ve learned with my own high need child) is that we aren’t without hope. While we may need to be flexible with our parenting styles or strategies, and while we need to be “exceptionally objective and consistent”, our high need kids can certainly learn to cope and even thrive with their increased intensity and persistence.

Parenting a high need child isn’t easy. We may face criticism and judgement along the way (from ourselves and others). We will likely second-guess ourselves, and feel like giving up at times.

But keep parenting the best way you know how, with the hope and knowledge that things will get better. Your child is lucky to have you; a parent who is willing to learn and grow alongside him, and who believes in the amazing person he’s becoming.

The Myth Of “You Made Him That Way”

The Aftermath of Colic: Are You ‘Over It’?

Previous Post Merry Christmas to Us!!! Rock ‘n Play Has Gone Automated Next Post Is My Baby Colicky or High Needs?