Beware of Opinions that Pass for Gospel

The other day, an acquaintance of Julie’s asked for help with her child’s sleep through a posting on Facebook. Instead of help, she got a link to Dangers of Crying it Out: Damaging children and their relationships for the long term, by Dr. Darcia Narvaez. 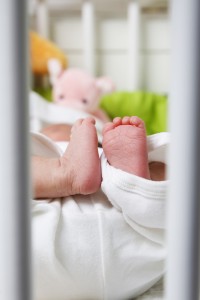 When Julie told me, I sighed, gritted my teeth, then swore under my breath (I understand Holly also had choice words for this article).

Last winter I ranted about a similar article on my blog, and I would like to share an excerpt of that entry, as I believe it is pertinent to parents – especially mothers, of fussy babies:

Last week, Julie opened a message from the owner of her favourite baby store that read: “This article explains how crying-it-out leads to sleep in infants — it’s not because it ‘teaches’ them to sleep!”

The article, entitled, Why I no longer believe babies should cry themselves to sleep is a set of arrogant assumptions that, when read by new mothers, can greatly heighten anxiety and make their decisions more difficult.

I’ll let you read it for yourself, but it essentially argues, with no reference to supporting evidence, that “the implicit message an infant receives from having her cries ignored is that the world — as represented by her caregivers — is indifferent to her feelings.” He also writes that when parents allow their children to cry themselves to sleep, “the short-term goal of the exhausted parents has been achieved, but at the price of harming the child’s long-term emotional vulnerability.”

I won’t pretend for a moment that Julie and I don’t have a particular sensitivity to this topic. We were left with no choice with Chloe but to let her cry herself to sleep. She had had wicked colic, and at 5 months old it was the only way to allow her and us to sleep and to regain our sanity. Before sleep training, the girl looked like a wasted heroin addict (think Trainspotting).

After sleep training, her mood improved dramatically and she started to smile regularly. She was happier because we had managed to get her some sleep. As for co-sleeping? Great if it works for you. It didn’t for us. 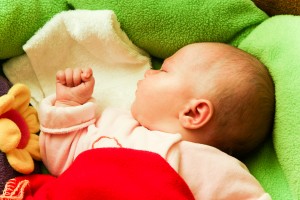 One thing I’m confident of with both girls (and as a nail-biting, nervous father, believe me I looked for it), is that they very rarely cried because they felt abandoned or because they needed us in any real sense.

A mother and father get to know their child’s cries the longer they know their child, and although there were a few times we wish we had gone in sooner because we detected distress in a cry, most nights our children only cried in frustration at trying to fall asleep or out of frustration at being told they had to go back to sleep. When I go in at night to tell Emily she must go back to sleep, she protests in anger. She knows what I’m asking, and she’d rather not. Yet every morning, Emily wakes up smiling and cooing. She is the happiest baby on the block.

Do I have any concrete evidence to back up my sense that my kids don’t feel abandoned when I let them cry? No, of course not. But fact isn’t apparently what counts in these battles. They are battles of “you think, I think.’ And, let’s face it. They are really battles of who thinks who’s a better mother.

The danger this type of speculation poses can be very real when it is passed to new and sometimes vulnerable moms as fact. Julie opened the article, not just to stick her tongue in a sore tooth (which is unfortunately an all too human temptation), but to see if there was some new research that might make us take pause when it comes to our approach to sleep. What she got instead was a link to baseless opinion, cloaked in supposed medical expertise.

And the babyshop owner / mother who shared it? What was her motive? I can only guess some sort of self-gratifying vindication of her own mothering approach.

So why is it that some mothers feel the need to share their unsolicited opinions on parenting so openly and aggressively? (I’ve been harangued myself on the street and in parks by mothers too willing to tell me what I’m doing wrong) — I propose, and I invite comment on this, that mothers who tell other mothers how to parent do so out of a deep insecurity about their own parenting abilities — a sort of, see, I’m doing it right because you’re doing it wrong.

I suspect I’m not the first person to suggest this, but I’d like to suggest it, strongly, as a father, to mothers out there because I feel that this behaviour has led to a very unfortunate and detrimental environment for many mothers.

Just to be sure that the landscape hadn’t changed since the last time I’d written on this matter, I went through the torture of reading Dr. Narvaez’ article. But of course, nothing has changed. This article has nothing more to back it up than any of the others I’ve read. And yet these opinion pieces are passed on as gospel, seemingly without the least concern for the effects they might have on new mothers.

Dr. Narvaez purports to be a psychologist and yet she presents none of the scientific research that would normally be used to back up her conclusions. It seems that with this topic, conjecture is enough.

This issue is not just about the parents. Children need sleep to grow and develop. For those who pass these articles on to mothers of young children, you should ask yourselves for whom you are doing it.

Then ask yourselves, what if you couldn’t get your child to sleep properly anywhere – with you or in a crib, no matter how hard you tried?

New Research Says Cry It Out (CIO) Doesn’t Cause Harm

BS Facts About Baby Sleep That Everyone Thinks Are True

Sometimes It’s About the Less-Bad Option