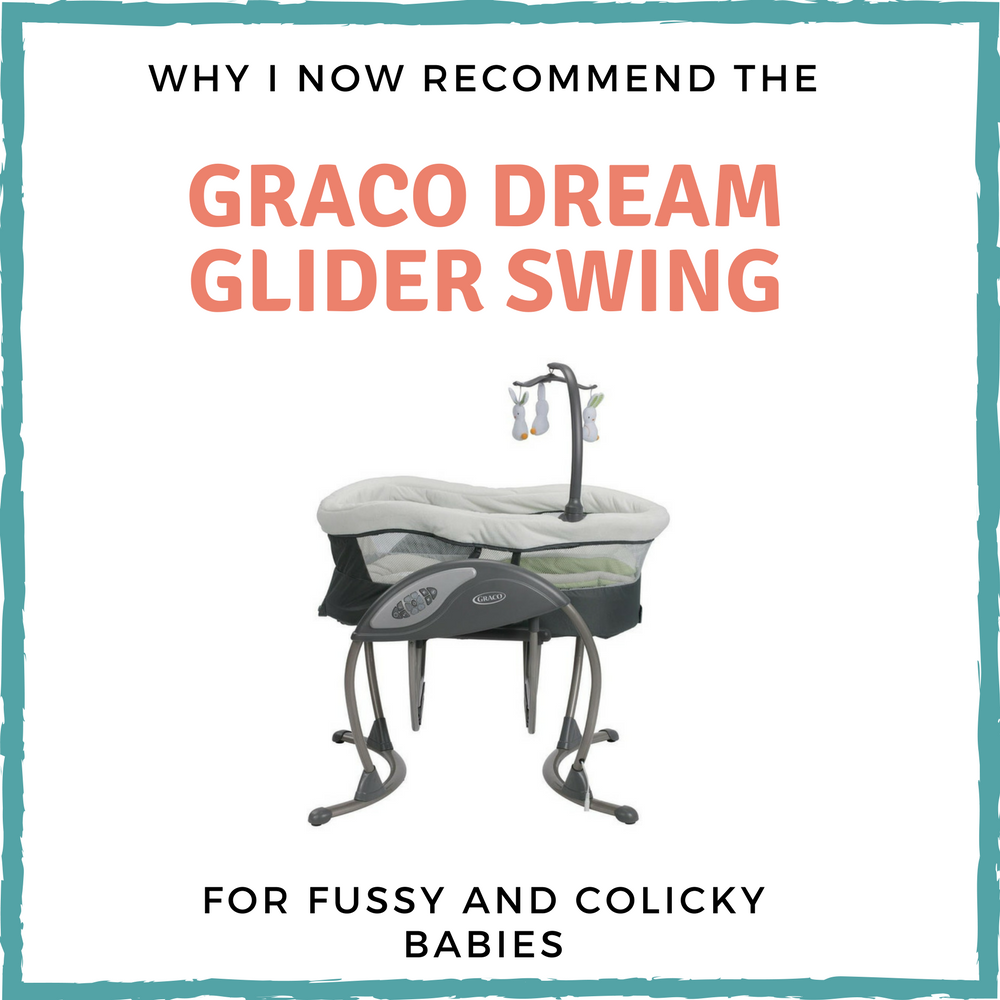 If you’ve been around this site for a while, you’ll probably know that the #1 swing I have always recommended is the Fisher Price Cradle ‘n Swing.

When Sammy was small enough to use a swing (10.5 years ago!), we bought a second hand Fisher Price Aquarium cradle swing for him to sleep in.

Prior to this, it took every bit of creativity, effort and determination I had to get him to fall asleep…and then he would wake up 45 minutes later, SCREAMING!

After buying the swing, I figured out his ideal routine by trial and error: wrapping him up snugly in a swaddling blanket, putting on the white noise, bouncing him to sleep, then putting him in the swing at full blast.

The first night I did this, he slept for 12 FREAKING HOURS STRAIGHT! 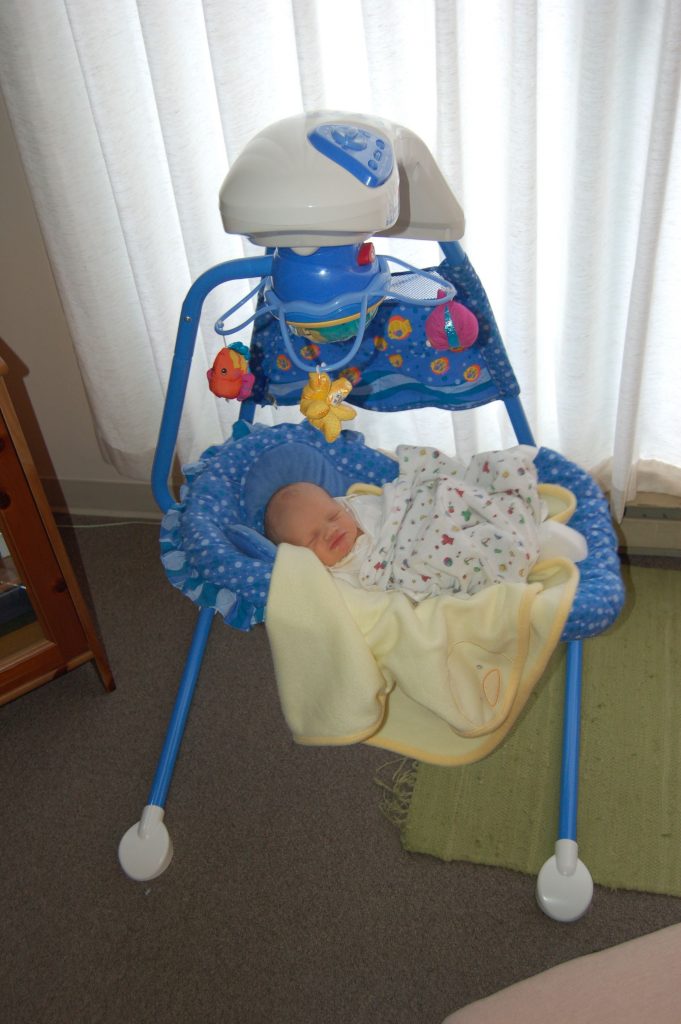 Doesn’t he even look grumpy in his sleep?

After weeks and weeks of fragmented sleep, you can imagine my elation at this new routine!

The problem with using swings for sleeping

My own experience with the Fisher Price Cradle ‘n Swing is what first got me recommending this swing. Over the years, I’ve recommended it countless times, and I know it’s been a lifesaver for thousands of exhausted parents and babies.

However, the one issue I’ve always had with the swing is that it does not fully recline.

So, what’s the big deal about that?

Well, in rare cases, babies who have been placed in swings, bouncers, rockers or slings to sleep have suffered from positional asphyxia. In laymen’s terms, this is when the baby’s head slumps forward and rests on their chest…potentially restricting the flow of oxygen, and ultimately suffocating them.

When Sammy was a newborn, there wasn’t a lot of research or awareness out there about positional asphyxia.

In fact, when my first was born, she often slept in the car seat, day and night; and when Sammy came along, it just seemed like common sense to me to let him sleep in the swing (if you can find a way to help them sleep, why wouldn’t you use it??).

However, in the years since, I’ve struggled a lot with this one – I know how difficult it is to have a fussy or colicky baby who won’t sleep.

On the other hand, parents need to know of any potential risks that may result from using baby swings for sleeping.

While the Fisher Price Cradle ‘n Swings appears to be slightly more reclined than many other swings, as you can see in the picture above, Sammy’s head is still slightly slumped against chest.

In my opinion, this makes the Fisher Price Cradle ‘n Swing ideal for daytime use, but not for sleeping.

Until recently, I hadn’t found a good alternative to the Cradle ‘n Swing that I could recommend to parents. 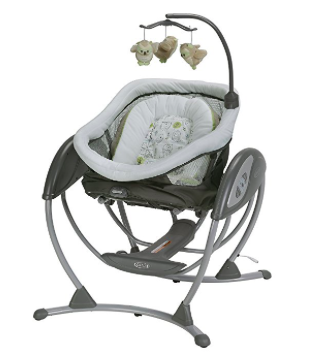 (Clarification: I’m a HUGE fan of the Fisher Price Rock ‘n Play Sleeper, and also often recommend this to parents. However, the Rock ‘n Play remains in a semi-reclined position, which presents the same risks mentioned above).

The #1 feature I have loved about the Cradle ‘n Swing is its speed – it’s the fastest swing I had found to date, which is often the KEY to getting a fussy baby to fall asleep.

However, over the past year or so, another swing has been catching my attention in my Facebook group of over 20,000 members: The Graco DreamGlider Gliding Swing and Sleeper (sometimes called the DreamGlider 2 in 1 Gliding Swing).

What I LOVE LOVE LOVE about this swing is that it not only swings, but it can also be reclined into a fully-reclined position. This means you can let your little one swing until he or she is asleep, and then simply lower the back into a reclined position (just like a bassinet).

And it’s FAST! From what I can tell it’s just as fast as the Fisher Price Cradle ‘n Swing, both when in swing mode and sleeper mode.

Reviews of the Graco DreamGlider 2 in 1 Gliding Swing

Having trouble picturing it? Here’s a video of one of our mom’s using the Graco DreamGlider for her two month old.

And here was her review of the Graco DreamGlider swing:

“MOMS! If you do not have one, go get one of these $180 at target & same price on Amazon! We’ve had ours for 3 days and I regret not buying it sooner.

It cradles them laying down- however it has a small tilt to it…. Perfect for acid reflux!

And the seat can sit up and cradle too.

It’s amazing! Typically my Rowan is way fussy at night, this cradles him at 6 different speeds AND vibrates.

I finally, after 2 months, got 6 hours last night, oh and he’s napping in it right now!”

Another one of our moms posted a video of the swing at its fastest speed:

She also had this to say about the DreamGlider:

“It was a life saver! The vibration was super strong, it was fast enough, and it saved our sanity lol!”.

Some other comments/reviews left by members of our group:

As already mentioned, one of the best features of this swing is its speed. Fussy and colicky babies tend to crave quick, jiggly movements, which the Dream Glider provides.

Of course, I also love that it’s a safer alternative to other swings and rockers on the markets.

Some other features I appreciate about the DreamGlider include:

The biggest con that I can see with the Dream Glider is the price: At $179.99, which is about $50 more expensive than the Fisher Price Cradle ‘n Swing, and about $100 more than the Rock ‘n Play auto.

But as far as I’m concerned, the ability to leave your baby sleeping in it more than justifies the price! That, along with the fact you can probably use it at least an extra month due to the increased weight limit, and I wouldn’t hesitate to make the investment.

Check out the Graco DreamGlider swing on Amazon now!

*Please note: Some of the links above are affiliate links, which means I receive a small commission if you click through and make a purchase. However, I never recommend products that I don’t truly believe in. Read our full affiliate policy here.

Previous Post Our Review of the Sleepy Stroll Next Post A Possible Treatment Or Cure For Colic?