I had two disagreeable newborns.

Neither were the kind of babies who could nap anywhere or go anywhere or be amenable to whatever situation they found themselves in. They hated the car, they hated being put down.

Really, they both hated pretty much everything.

It was hard enough being around all of my friends while my kid screamed, feeling embarrassed that my baby would not and could not be quiet.

It was even harder seeing my friends with their unusually happy kids.

Leave it to me to have friends with dream babies:

It’s nap time for you, baby. No crib? No problem. Just pass out on this couch and have a snooze.

It’s nap time and we are out and about? Oh well, just continue being your happy self until you get in the car at which point you’ll drift silently into la la land.

We are at a friend’s house, so just sit here on my lap and look around, for hours, without a peep. Because that’s just the kind of kid you are.

A friend of mine, who was also blessed with a colicky baby, describes these happy babies as “miracle babies.” And it seemed like every one of my friends with babies the same age as mine had one.

Three and a half years later, I am still jealous.

I even have a friend who recently told me she feels badly that her baby is so good. I wanted to tell her “you should feel bad! Your baby makes me feel bad!” but then I realized I’d sound insane, so I kept it to myself.

I don’t begrudge my friends their happy babies. I’ve said before that I wouldn’t wish a colicky baby on anyone, and I wouldn’t. But man, why can’t your baby whine once in a while?

Why can’t your newborn be super cranky when we’re out in public? Maybe make a peep beyond a coo?

Can’t your kid at least be annoyed when they’re wet? Maybe scream when they’re hungry? Maybe lose their mind when we’re on a mall walk, at least once?

Fuss at the boob in front of me, will you please?

Last weekend we visited friends whose 6 month up was up in her crib at bedtime and not sleeping. At what point we heard ‘eeeeeeeh’ on the monitor. It lasted about 6 seconds. My friend went up stairs because her daughter was ‘cranky.’

She came back downstairs with her smiley happy baby and I said to her ‘THAT was your daughter cranking? Really?!?’ Apparently yes, that was her protesting.

It was about 9pm and she was on the couch watching television with us happily until she went up at 10 and then went to sleep for the night without a peep.

I looked at my husband and said ‘man, how can we get one of those?’

I am happy for my friends that their baby is so wonderful. Really I am.

But I can’t help but feel jealous, and ripped off.

Neither of my babies were that laid back, ever. There was no ‘eeeeeh’ protesting in our house. It was more “WAAAAAAAAAAAAAAAAAAAAAAHHHHHHHH” and it didn’t stop after 6 seconds.

Somewhere between my friends and their miracle babies and me and my fussy ones, there should be a middle ground.

That’s not to say my friends kids never were cranky. I’m sure they were. But never in front of me, while my kid screamed. And mostly, my friends admitted, they were pretty much happy most of the time.

I can’t even wrap my head around that.

I think ‘newborn,’ I think fussy screaming child. The two are intrinsically linked in my brain and will forever be.

Jealousy is not a nice thing to feel, especially in relation to friends who we care about. But I couldn’t help but look at my friends and their chilling kid, right after I just listened to my son lose his mind at bedtime, and not feel that twinge of jealousy.

I don’t care if my friend’s kids smile early, walk early, talk early or give kisses early. I never felt an ounce of jealousy when I listened to my friend’s daughter talk and say “I love you” while my daughter still only had a few words.

But bring your cooing newborn around me? It will make jealous every single time.

I used to feel guilty about feeling jealous. But my friend with a Miracle Baby made me feel like I had every right.

And then I realized why I get jealous. Because, I have no idea how I did it either.

Because it was hard.

It’s not that I handled it. It’s that I survived it, because I had no other choice.

It doesn’t make me a bad person for feeling jealous of people and their easy babies.

It makes me human. 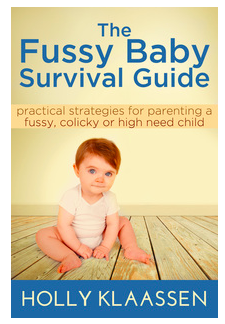 Wondering how you’re going to survive your fussy baby or toddler? The Fussy Baby Survival Guide (ebook) provides practical strategies for soothing and coping with your fussy, colicky or high need child. After 10 years of running The Fussy Baby, speaking with most of the leading experts in the field, and running Facebook support groups with over 20,000 members, I’m confident you’ll find unique insights and techniques in this book!

Check it out or grab your copy now

Jeni’s Story: Survival is the Only Option

Previous Post Amy’s Story: “Doing it all Wrong” Next Post The 9 Causes of Colic, Fussiness, High Need Behaviour and the Spirited Temperament